While Andy Warhol predicted everyone would have their 15 minutes of fame, reality proved to be very different. With the sands of time running out in a matter of seconds, obscurity beckons in the flash of the eye and as we continue our travels into metal’s forgotten past, we now turn our attention to S.A. Slayer.

Back in 1982 there were two bands in the USA operating under the name of Slayer. The thrash metal titans from California are known to all and sundry but lurking in the depths of San Antonio, Texas was another Slayer. A Slayer who wanted you to Prepare to Die and would Go for the Throat!

So who exactly were this Slayer?

Signing to Rainforest Records, the band released their Prepare to Die EP in 1983 as Slayer. After a dispute with Metal Blade Records over the band name, they added the S.A. prefix and released their full length debut, posthumously, in 1988 on Under Den Linden Records, four years after disbanding.

Comprising of 4 songs plus a short intro, Prepare to Die is a well crafted slab of early US Power Metal. Sounding like a technically superior take on the NWOBHM via Mercyful Fate and Show no Mercy era Slayer, Prepare to Die is classic metal the old school way.
After opening the door to hell, the band launched into the title track with a ferocity that was rare for 1983. Blazing riffs and proto thrash speed is combined with the helium fuelled pipes of Steve Cooper for a raging headbanger of a tune that rivals anything else for the time period.  “Final Holocaust” carries on the aggression with a slamming mid paced groove and a Budgie inspired middle section with the metal dialled up to 11 for another winner.  Side 2 continues the metallic mayhem with “Unholy Book”, mixing Priest like grinding guitars and up tempo melodic tinged choruses for perfect effect. Ending on the more progressively minded “To Ride the Demon Out”, the band rode a Maiden-esque staccato groove with rapier guitars and shrieking vocals.
Whilst both guitarists shine throughout, mention should be made of the helium pipes of vocalist Steve Cooper who floats these songs into the upper echelons of US Power Metal. Without a shadow of a doubt, Prepare to Die should be revered as a highlight of early US Power Metal.  9/10

S.A Slayer (Go for the Throat, Under Den Linden Records 1988) 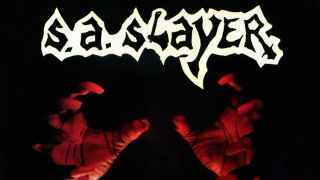 Recorded in 1984 but shelved due to the threat of litigation over the band name, Go for the Throat would eventually surface 4 years later after the band had split up. With future Watchtower shredder Ron Jarzombek in for Art Villarreal, Go for the Throat upped the aggression and technicality but was ultimately let down by vocalist Steve Cooper.  Unlike his performance on the preceding EP, Steve sounds rushed and out of place, especially given the more aggressive tone of the album. The production doesn’t help either putting him up front and centre in the mix, exposing his flaws for all to hear.
Despite the serious flaws, instrumentally this is a near perfect heavy metal record. Combining the sophistication of Mercyful Fate with Show no Mercy Slayer, Go for the Throat is a maelstrom of riffs, punctuated with guitar and bass pyrotechnics. In 1984 this was high tech and ahead of its time. Sadly by 1988, thrash had moved the musical landscape to further extremes of technicality and aggression, leaving Go for the Throat out of time and out of place. However, listened to within the context of when it was recorded  this is a near flawless musical soundscape.
If Go for the Throat had come out in 1984/1985 with a more aggressive vocalist like David Wayne then it would be legendary. Sadly, it is severely hamstrung by a lacklustre vocal performance and production that delivers it stillborn to the world. Despite the flaws, musically this is classic metal and more than deserving of a listen. 7/10
Whilst S.A. Slayer are a footnote in metal history, their members would go on to bigger things. Ron Jarzombek would end up in influential progsters Watchtower. Don Van Stavern in legendary heavy metal band Riot and Dave McClain would join thrashers Sacred Reich. before making his name in Machine Head. Despite the lack of success for S.A. Slayer, they left a musical legacy they can be proud of.
The debut EP may be the superior of their 2 releases but with luck on their side we may never have heard of the thrashers from California.
Enjoyed this? Take a look at Bands That Time Forgot: OSTROGOTH