Any thrash fan worth their salt will have experienced a lot of Overkill in their lifetime. Generally considered one of the finest thrash bands in existence – and certainly one of the most consistent – these New Jersey dogs have released a fair few all time classic’s (The Years Of Decay & Horroscope instantly spring to mind) but one album in their formidable back catalogue has often proved the most divisive; that album is I Hear Black, a dark, groove-filled excursion into what was brand new territory for the band.

An album that seemed to take huge risks in dropping the light-speed riffing that made their name, the pared down, grinding grooves of opener “Dreaming in Columbian” and “Weight of the World” were, in hindsight, the perfect mid-tempo answer to grunge and alt rock/metal’s arrival. Predictable? Maybe. Necessary? Definitely. And what’s more, Overkill were surprisingly good at this groove metal lark!

Bobby “Blitz” Ellsworth always had a distinctive voice – a little shrill and yet perfect for thrash – but the slower tempo’s employed on I Hear Black allowed his vocals to truly come to the fore and he delivered a performace of barely controlled animalistic aggression throughout the entire album, peppered with more melody than ever before. 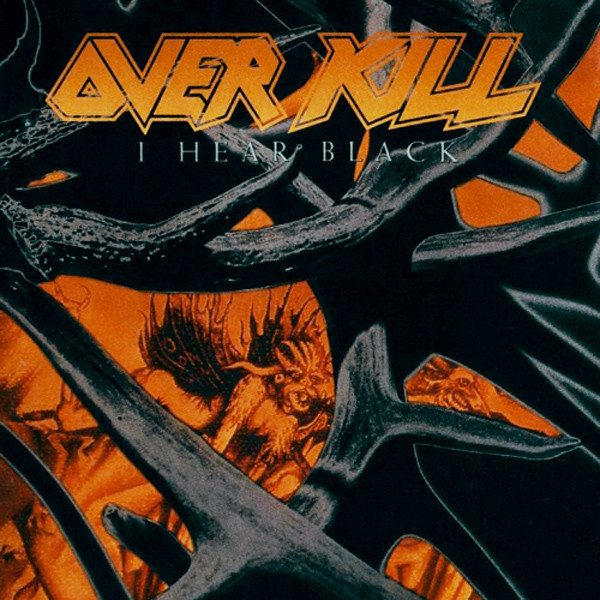 While the speed of old was obviously missing, I Hear Black was still heavier than the proverbial ‘sack of spanners’ and the likes of “I Hear Black”, “Feed My Head” and the lead-weight riffing of “Spiritual Void” remain thick slices of crusty creativity topped with the kind of monstrous riffs most bands would kill for.

It’s still thrash, just a kind of post-thrash (yuck, can’t believe we dared even say that), a muddy off-road drive through thrash metal’s fundamentals, left spattered with muck, grime and greasy entrails. In fact, ‘black’ sums it up, Overkill had never sounded so dark and so nihilistic, a heady trip through Sabbath-ian riffs that was totally at odds with the punk-infused racket that had made their name in the 80’s.

I Hear Black proved Overkill were no mere one trick pony and were one of the few thrash metal bands (Anthrax achieved a similar level of diversity with Sounds Of White Noise) to adapt and survive the 90’s with their integrity attached.

I Hear Black is definitely Overkill‘s most underrated album and it remains a damn fine album to boot!

1 Comment on I Hear Black: Is It Overkill’s Most Underrated Album?