Worship Metal casts its critical eye over the 10 Greatest Old-School Thrash Albums from the only country to truly rival the U.S in the thrash stakes; Germany!

Predominantly an American phenomenon, thrash metal spewed out a slew of solid bands throughout Europe, Australia and South America but positively erupted in Germany. The sheer number of considerably skilled Teutonic thrashers arriving on the scene in the mid 80’s was astonishing and mounted a serious challenge to America’s dominance.

Mixing a furious blend of skin-strippingly raw and bloodied riffs with unhinged, snarling vocals and breakneck speed, Germanic thrash bands had a sound all of their own. While the Americans were preoccupied with showmanship and lengthy compositions, the Germans concentrated on the most ugly, twisted and animalistic thrash imaginable. Why bother with refinement and composure when you can simply thrash harder, faster and with more venom than the rest!

The sheer number of worthy albums which were considered for this feature was extraordinary, with the Teutonic scene delivering quality release after quality release for the majority of the mid 80’s to the early 90’s.

With that in mind, a one album per band mantra has been adopted to allow for diversity.

On an album that never fails to impress it’s the attitude of Holy Moses that hits hardest; a fearless, punk and grindcore-infused, middle-finger to the face of mainstream sensibilities that set them miles apart from many of their contemporaries.

Each track snaps and snarls but it’s “Current Of Death” that hits hard enough to put you into a coma (Death Angel nicked Sabina Classen’s irrefutably catchy “whoah, whoah, whoah” delivery on 2004’s Thrown to The Wolves incidentally) while “Fortress Of Desperation” settles into a groove that’ll have you bangin’ ’till you puke. Just don’t ever steal their beer, you won’t like the outcome!

Also recommended: With 1988’s The Morning After, Tankard’s sense of fun was amplified but so was their technical proficiency.

The Teutonic 4 of Kreator, Destruction, Sodom and Tankard really should make way for a 5th member, as Exumer‘s relatively obscure debut rivals the very best the German scene had to offer.

Possessed By Fire is a perfectly executed exercise in bestial devastation and should have elevated them to superstar status. Each track runs the gamut of time changes and mood-swings and exhibit an addiction to attention deficit that makes this one album nigh on impossible to resist.

Completely unpredictable, Exumer’s sound is defiantly thrash but not as intimidatingly raw as the albums produced by Destruction and Kreator at the time. In fact, at this stage in their career Exumer were actually the more accomplished musicians and gifted songwriters as indicated on the title-track, “Destructive Solution” and  ‘A Mortal in Black”.

A legendary cult item that throughly deserves it’s lofty position in this list, Exumer’s debut is one outrageously ornate thrash album that will continue to attract new fans; its schizoid attitude and countless charms are just too damn addictable! On a par with the awe-inspiring work found on Artillery‘s By Inheritance and Annihilator‘s Alice In Hell, Vendetta’s technical prowess and crystal clear clarity showcased a band whose merits were writ large. After all, Brain Damage truly is an unsung masterpiece from the golden era of German thrash!

Also recommended: 1987’s Go and Live… Stay and Die more than hinted at the genius that was to come! 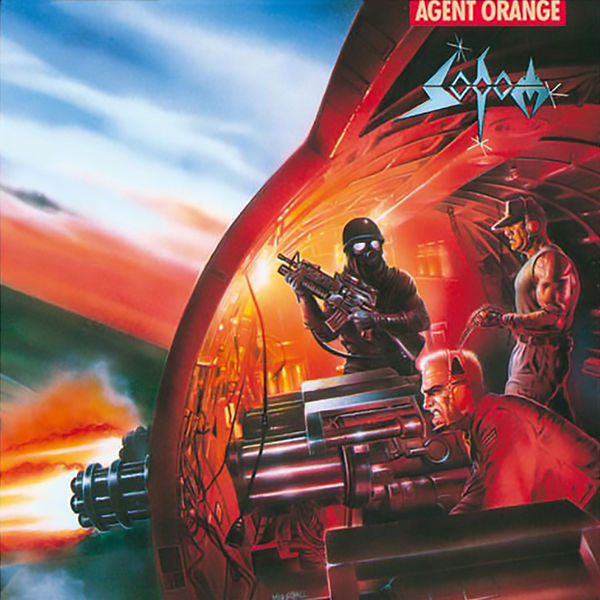 Bidding a fond farewell to the knuckle-dragging sound of their Obsessed By Cruelty debut and harnessing the considerable progress made on Persecution Mania, Sodom tickled the fancy of the mainstream with their 3rd album, Agent Orange….and the world took notice!

As deadly effective as the title would suggest, Agent Orange stood out in what was a banner year for thrash; to hold your own against the might of Annihilator’s Alice In Hell, Sepultura’s Beneath The Remains, Overkill’s The Years Of Decay and Kreator’s Extreme Aggression takes some doing….but Sodom proved more than worthy of the challenge. These Germanic, bullet-belt strewn boys made one hell of an entrance when their full-length debut detonated over 35 years ago.

While Infernal Overkill may have lacked subtlety and finesse it more than made up for its shortcomings in frenzied raw power and youthful exuberance. Destruction would go on to define the Teutonic thrash scene and give rise to the unstoppable force of death metal….but it all began here!

Also recommended: Destruction released a technical thrash masterclass in the deformed shape of 1988’s Release From Agony and for more ‘classic thrash, you can’t go wrong with 1986’s thrashing whirlwind that is Eternal Devastation! After the relatively no-thrills thrash found on Deathrow’s Riders Of Doom aka Satan’s Gift and Raging Steel (both are worth checking out, incidentally), there was virtually no indication that Deathrow would break boundaries with their 3rd full length release!

Complex and rhythmically confounding – but never at the cost of a satisfying sense of structure – the likes of “Narcotic” were insane blasts of technical wizardry and should have marked Deathrow out as pioneers of progressive thrash metal this early in the game.

Instead, obscurity beckoned with Deception Ignored initially receiving a lukewarm response from a legion of confused fans. Fortunately, this outstanding album has gone on to be revered as a work of almost labyrinthian art; misunderstood by many but now beloved by those in the know.

A technical thrash masterpiece from a band way, way ahead of the curve! How could this genre milestone not be at Number 1?!

A landmark moment in thrash history, Kreator‘s Pleasure To Kill stands proud alongside Metallica’s Ride The Lightning, Slayer’s Reign In Blood, Megadeth’s Rust In Peace, Exodus’ Bonded By Blood, Dark Angel’s Darkness Descends, Forbidden’s Twisted Into Form and Anthrax’s Among The Living as one of the greatest thrash albums ever recorded.

Kreator altered the German thrash landscape with Pleasure To Kill and frankly, mayhem of this calibre never sounded so good again.

Also recommended: Take your pick from Terrible Certainty (1987), Extreme Aggression (1989) and Coma Of Souls (1990)….all are worthy of inclusion here!

If we’ve forgotten your favourite old-school German thrash album, leave a comment below and we shall engage in banter…..